An Open Letter to Matt Walsh

I read your response to the Women’s March that took place on Saturday. While I could respond to the myriad of inaccurate things you said–including the 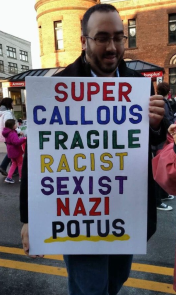 assertion that the wage gap between men and women doesn’t exist, or how masculinity and femininity are defined, or how you missed the point that the mission of the protest(s) directly correlates with the fact that a man who has openly assaulted women, degraded minority groups, rejected Climate Change and mocked the disabled was just inaugurated as President of the United States of America–I
am not going to.

I am going to address one thing. Abortion. Since your perception seems to be that all women attending the event seek to kill their young, let’s talk about that. And remember, I am talking about it because YOU made it the big issue.

“It [feminism] rejects all that is inherently kind, giving, compassionate, sacrificial, and loving in womanhood, encouraging women to live only for themselves instead — even if blood must be shed in the process.” – Matt Walsh 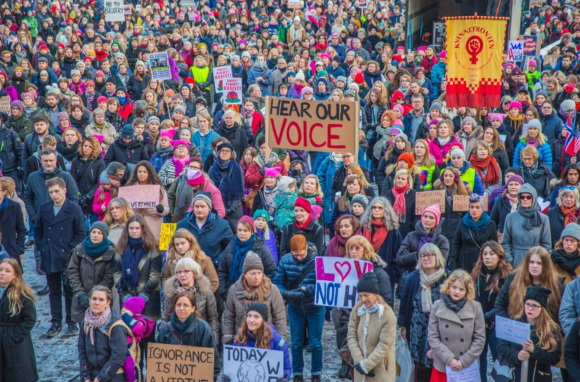 Matt: Where are all of the vagina-clad, genitalia-obsessed women here?

Before I continue, I should preface this post with a few things, as I am confident you may disagree with me, chalking my comments up to being a “liberal” or one of “those” women or [insert other label you’ve called  women that disagree with your position].

Now that that’s out-of-the-way, let’s talk about your condescending, judgmental, divisive, and awe-inspiring post about [mostly] abortion. You see, while my preference is that an individual never feels the need for an abortion, history has shown us that people make tough decisions when they feel desperate.

This image also seems to be void of the vagina costumes and the like. Based on the signs we can see clearly, I read: “HOPE”, “Truth & Science”, “Don’t Frack in Maryland”, “We Go High”, “Mother By Choice”, “Resist Hate”, “Real Men Aren’t Bullies”, “Love”, “Fight Ignorance” and “Build Bridges Not Walls”.

This leads me to one question:

Why do you think a woman goes to Planned Parenthood?

I am guessing you think it’s because she needs information about how-to conduct “baby murder”/ is looking for a place to “murder” her baby. Sound about right?

From my vantage point, women started seeking out organizations like Planned Parenthood because it provided them with a SAFE place and non-judgmental advice/support regarding sensitive issues like unplanned pregnancy, as well as receive cancer screenings (pap smears, breast exams…), discuss infertility options, or accept care for general health needs like anemia testing, screening for cholesterol or diabetes, and vaccinations. In the case of something like an unplanned pregnancy, I anticipate women were (are) looking for a place where they wouldn’t be ostracized or slut-shamed.

Personally, I know six people who have terminated pregnancies, and all were due to complicated situations–not because they celebrate “murder”.

Each of the aforementioned women found themselves in terrifying situations that would have required an enormous amount of support to make it through their pregnancies let alone actually raise a child. And, if non-judgmental support doesn’t exist, it’s not hard to see what choice a woman may be forced to make.

I anticipate that you may say something like: “Those women should never have been in those situations to begin with. They shouldn’t have had sex…” Sure, abstinence is the only proven method to prevent pregnancy, but have you ever done something that equated to undesirable consequences?

My point is that many (of course, not all) women make the decision to terminate a pregnancy out of desperation, as society is not in a good position to support families–especially single mothers. If the government, the Church, commentators (that’s you), and society as a whole did more to tangibly support and love women in general–including women with unplanned pregnancies–then maybe we would see a decrease in the number of abortions? Maybe women wouldn’t feel like they HAVE to fight for their own rights and fight to be heard?

It should also be said that if I had known about the aforementioned situations while the women were grappling with what to do, I would have stepped up to help as best as I could, understanding that the decision was ultimately hers to make.

So here’s a tip: Instead of shaming and condemning women, and intentionally disregarding the heart of what they’re saying, why not offer productive alternatives to what you disagree with?

Hate Planned Parenthood? Okay, then offer some alternative safe places for women with unplanned pregnancies to go to.

Hate abortion? Provide information on adoption agencies, complete with statistics about how many people are awaiting to receive a child.

Finally, here’s what not do to: What you just did. Make sweeping generalizations about why between 3 and 4 million women AND men marched in the United States, and why thousands more across the globe marched in solidarity.